I Love Kids in Horror Novels! 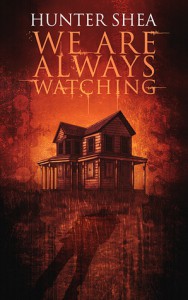 Over the past year or so I've become a huge fan of Hunter Shea so when my friend and I were looking for a buddy read, this became the obvious choice. "We Are Always Watching" grabbed me right from the start and didn't let go until the end - and that ending! 14-year-old West and his parents have had to move to Pennsylvania to live with his Grandpa Abraham on a rundown, decrepit farm. West's father suffers from severe vertigo which makes him quite handicapped following a car accident and the family has fallen on hard times. West's father hates returning to his childhood home and his mother is busy working so the family can eventually move out.

Immediately from the start, West senses something is wrong. His Grandfather has hinted that the house is haunted and West and the family starts finding messages left on the inside and the outside of the home. Grandpa finally discloses that the house is being watched by The Guardians, who do not like change and disruption. Things start happening around the home such as messages left on mirrors and finding Grandpa passed out and bound outside, but the more people whom the family tells what is happening, the more that happens.

I loved this entire book! Grandpa is an old crotchety drunk and not an very likable character, but ultimately he is trying to keep his family safe, although he is also hiding a lot of secrets. West's parents are just struggling to get by and not lose hold of their family in the process. However, West if by far the best character. First of all, he loves everything horror, in fact, he is initially intrigued that the house might be haunted. West always has his nose stuck in a horror book and he has posters from famous movies plastered all over his bedroom walls. "We Are Always Watching" took a real turn about halfway through the novel and I have to admit, it wasn't what I expected. Without giving too much away, it's best to go into this book with limited knowledge so the reader feels the shock and terror right along with the family.

This was a fun book to buddy read and I feel like I read enough of Shea's work. He's definitely an auto-buy author for me and I can't wait to see what he comes up with next!

I will be using this novel for the HORROR square on my Halloween Bingo Card.